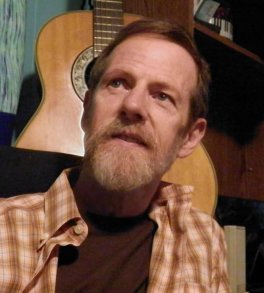 My brother Chris once asked me to “stop the hero worship stuff," so I’ll try my best not to gush.

Still, I’m proud to be in on the behind-the-scenes story of a man who has written hundreds of songs, played on commerical recordings, arranged for symphony orchestras, taught music, and helped many aspiring songwriters and performers record demos.  After a long career in publishing and raising a family, he has recently returned to his calling in the field of music.

Chris has many influences, from Beethoven to big bands to the Beatles to early Pink Floyd (the psychedelic period).  He enjoys a wide variety of music styles, so it’s hard for him to nail down a number-one hero among his many inspirations.

Now based in Warrenton, Virginia, Chris grew up with me in Broad Channel, New York.  Even at the age of 6, he was writing songs on his toy xylophone.  As time passed, the tools changed to a two-octave electric organ on which he taught himself to read music, a borrowed plastic ukelele, a real baritone ukulele, and finally an electric guitar.  He’d been happy with the 4-string ukulele; a 6-string guitar seemed like way too much work.  But when our cousin was starting a band and they couldn’t figure out how to amplify the ukulele, he had to give in to the guitar…though now, of course, he’s glad he did.

This “whatever it takes” attitude is also behind the fact that he later added to his arsenal trumpet, flute, sax, clarinet, harmonica, recorder, bass, drums, keys, and whatever else he could get his hands on.  The reason?  He was fascinated with arranging and needed to play lots of instruments so he could arrange for them and test out his musical experiments by overdubbing them on tape.

Thanks to the public library system, he also learned the classic principles of melody, harmony, theory, and orchestration—all before turning 18.  No formal music training at that point, but “whatever it takes.”

Okay, it’s time for a short gush break:  I think of him as a musical genius.

Chris is also a gifted artist.  He majored in Cartooning at the High School of Art and Design in Manhattan, which later helped in his computer graphics endeavors, but the muse of music wouldn’t let him go that easily.

He performed in and led many cover bands through his teens and twenties.  He also applied to play for an off-off-Broadway theater production that led to his becoming a co-writer and musical director for other Peter Copani shows—The Opposite Side of Sonny, Street Jesus, and Power.  For some of these musicals, his electric guitar was the sole accompaniment.

While directing the music for Street Jesus in Greenwich Village, he met cast member John Burstein, who later developed the edutainment persona of Slim Goodbody.  This longstanding liaison and friendship provided many musical adventures, including:

During this time, Chris was a self-described atheist who turned agnostic while sorting through the multitude of options in the spiritual world.  He was already a kind and considerate person, with great patience and understanding.  But the church life he'd experienced didn’t lead him to a God he wanted to know—or thought he could.

At the age of 26, as Chris says, “God came to rescue me through some people spreading His word in Washington Square Park [New York City].”  Wary but open, Chris was led to understand the gospel in a way he never had before.  Even after praying to strike a bargain with God (basically, “I’ll give you my life if You’ll give me Yours"), he wasn’t convinced that the event would change his life forever.  But it did.  His song “Eternal Life” is one way he expresses his elation over this change.

Chris brought the message of Christ's love home to his family.  One afternoon, we prayed together and I asked the Lord Jesus to take me as His own.  I will be forever grateful for that day and my brother's love for me that moved him to take the time to do that.

After meeting and marrying his wife Anne, then helping to add two boys to the family, he found it took full-time employment to cover expenses.  Though that put a hold on full-time music, there was still activity in that arena:  TV production and video editing work at a local public access cable channel (where he wrote and produced a popera called “The End” and three episodes of a sitcom called “Three Brothers”) and church work (playing on and leading worship teams and choirs).

John Burstein also added the occasional project, and passed on opportunities.  One conductor John knew hired Chris to orchestrate for orchestra and choir a 2006 performance in Yorktown, Virginia, marking the end of the Revolutionary War there 225 years earlier.

After ending his employment career with 24 years as a contractor for first the Postal Service then the United States Mint in Washington, DC, I'm happy to say that Christian Staudt is launching himself full force into music production.  Having literally hundreds of “silent songs” on his books and more pouring out all the time (he “just can’t help it at this point”), you can look forward to some amazing sounds from his Virginia studio to keep both your soul soothed and your feet tapping.

His first indie album was released in 2017 with the title Life in the Eye.  The eye of a storm is peaceful and calm though hurricane-force winds rage around it.  This is the place where Jesus, the Prince of Peace, lived when He was in a physical body.  And this is the place He offers us to live as well.  The songs in this album explore this state of such total trust in God that, though we may be stirred, we don’t have to be shaken.

The first song produced was “Here with Me,” celebrating God’s continual presence.  Chris says “we have to remind ourselves that the words ‘I will never leave you or forsake you’ can—and should—drive us to joy all day long.  God’s promises can become so familiar that we lose the wonder of them; this song and the whole album will help you remember…and smile!”  Keep this shot-in-the-arm-in-the-spirit on your radar.

Next up?  A Christmas album we recorded together and a worship-oriented album this year.  Producing 24 songs in 12 months?  "Worth a try" says he.